Vintage Royalty Free Images
Download high resolution scans of antique engravings of plants animals for $5. No limitations on use.

Summary: engraving was invented thousands of years ago. It was used in antique art, jewelry and armor. Amazing, affordable computer driven machines are revitalizing this ancient art.

Engraving was invented thousands of years ago when people started to engrave gold jewelry and ornaments. 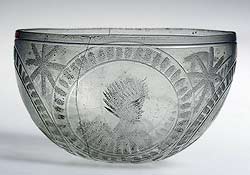 In antiques, engraving usually means a printing method. The engraver cut a design into a wooden or metal plate, spread ink on it and pressed it against paper to print the image.

Engraving was the most popular way of reproducing art until about 1900. Engraving was also used for making original art by artists such as Albert Durer, William Blake and Pietro Santi Bartoli.

Art engraving was hugely time consuming. After about 1900 it was superceded by lithography and photogravure, as these are more economical.

Nowadays, engraving is undergoing a revival thanks to amazing computer controlled laser engraving machines even small businesses can afford. These can engrave many materials, such as rock, glass, wood, plastic and metal. There are even water jet cutting machines capable of engraving metal. Gone are the days when making single engraving took weeks and weeks !

I became interested in engraving when I began collecting antique prints. I wanted to understand the process so I could tell a real antique from a reproduction. As my interest in engraving grew, I discovered that engraving was suddenly becoming popular again thanks to the invention of computer controlled engraving machines. I decided I would also use this site to document interest facts about the whole subject of engraving, from antiques to the latest techniques such as laser engraving and water jet cutting.

I hope you enjoy my site. If you would like to contribute an article or comment about engraving you are very welcome.